Home / Other infections / How to distinguish viral conjunctivitis from bacterial

How to distinguish viral conjunctivitis from bacterial 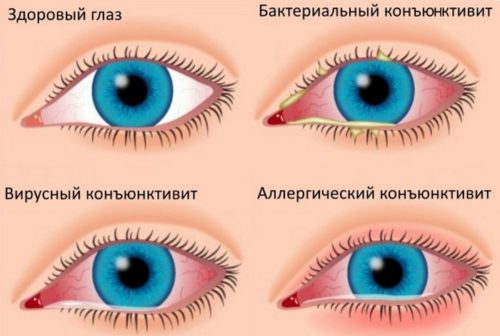 The conjunctiva is the mucous membrane which passes to the eyeball and covers the front of the eye up to the edge of the cornea.

Conjunctivitis can be classified according to several criteria that complement each other. In accordance with the course of the disease is divided into:

In accordance with the causative agent of the disease can be divided into:

Classification of conjunctivitis are very colorful and detailed, good for understanding, consider the different types of the disease according to the causative agent. The article thus offers an answer to the question of how to determine the type of disease and how to distinguish viral from bacterial conjunctivitis, chlamydial and allergic.

The emergence of bacterial conjunctivitis is most common in winter and spring. A disease characterized by suppurative inflammation, often occurs within a few hours. It is not the most common type of conjunctivitis, the incidence is only around 5% of all cases (unlike, for example, from viral, which is far more common).

Extra acute bacterial conjunctivitis caused by infection by the bacteria Neisseria gonorrhoeae or Neisseria meningitis, which are also agents:

Inflammation develops within a few hours, manifested by edema of the eyelids, purulent secretions and swelling of the lacrimal glands. Treatment conjunctivitis presents with antibiotics in high doses – either locally as an ointment, and by the General introduction in the form of tablets.

Acute bacterial conjunctivitis is most often caused by bacteria of the genus streptokok, hemofilus or stafylokok. Manifested by lacrimation, mucopurulent secretions, which stick together forever. Children, usually, the pathogens spread throughout the body and cause systemic symptoms of inflammation, such as elevated temperature.

Chronic bacterial conjunctivitis is often caused by Staphylococcus aureus, at least in its origin can participate intestinal bacteria. This form of inflammation is accompanied by inflammation of the eyelids.

Disease caused by viruses is the most common, typical symptoms represented a feeling of "sand in the eyes".

The transmission of the virus is through personal hygiene items contaminated with secretions from eye or respiratory tract or by direct contact with an infected person is most contagious in the first 10 days.

In this case, the separation of the disease is more complex, for simplicity, below are just a few types.Typical viral causative agent is adenovirus. Conjunctivitis caused in this way is very contagious and its transmission occurs easily, for example by the already mentioned personal care items or direct contact with an infected person. Secretion secreted inflammation of the eye are watery, slightly mucous membranes. Common symptom is the swelling of the lacrimal glands.

Children can often take place of the so-called pharyngoconjunctival fever, which is directly related to upper respiratory inflammation and high fever. As therapeutic measures recommended cold compresses and medications that cause narrowing of blood vessels.

The following types of conjunctivitis are those caused by herpes viruses (herpes simplex viruses that cause aphthae). This kind of is manifested with the increase of nodes on the conjunctiva can form tiny pouches.

Chlamydiae are parasites that survive within the cell. In humans, the most common bacteria is Chlamydia trachomatis.

Chlamydia is called as ocular inflammation andinflammation of the urethra, fallopian tubes and cervix. They are sexually transmitted.

Due to chlamydial infection of the conjunctiva there is a special type of inflammation, called trachoma. We have a disease practically does not occur, but it is the most common cause of blindness in third world countries due low level of hygiene. Most often symptoms appear on day 5 after infection in the eye, and are characterized by foreign body sensation in eyes, on both sides of the formed inflammation and purulent discharge. Trachoma often comes back even after successful treatment, as against this bacteria is not immune. Therapy, usually presented by taking antibiotics tetracycline.

The second type of inflammation that causes chlamydia is inclusive conjunctivitis in adults, which is a sexually transmitted disease, most common in young people. The penetration of bacteria into the eye occurs after hand contact with infected genitals and then with the eye.

The disease occurs approximately 7 days after infection, the development period varies from several weeks to several months, gradually the disease affects the second eye. A person, usually having little health problems, which he often did not attach much importance, therefore, inflammation is not entered timely treatment, which is why the disease can become chronic, lasting longer than 4 weeks. 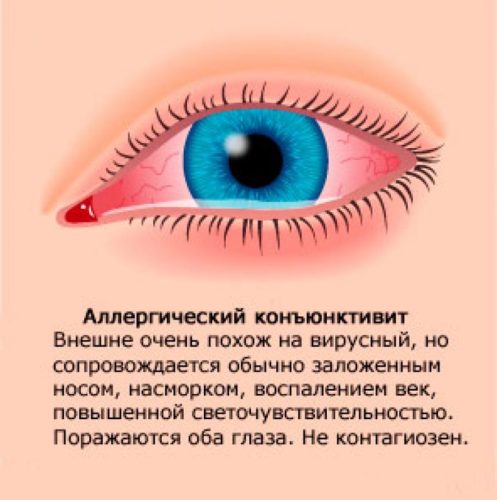 Always, if there is any eye strain or vlianie external harm – use drops for predotvratit infection

The conjunctiva is a place where very often there is contact of the human immune system with allergens. This is obviously because this place is relatively well open to environmental influences. If the body to a certain allergen hypersensitivity, allergic reactions.

Most often the disease is manifested by itching, burning, watering, swelling of eyelids and conjunctiva, or different degrees of compaction of the cornea. The allocation in this case are watery, slightly mucous but not purulent. The disease can occur during Allergy season or year-round.

Risk factors for the development of conjunctivitis

A risk factor is usually contact with these pathogens. The eye is the organ most sensitive, it is easy to damage, and for violation of a protective barrier infection penetrates the eye. The conjunctiva is the organ that is exposed to the environment to an even greater extent.

In addition, the risk factor may be an insufficient amount of tears – tears are one of the mechanisms that protect the conjunctiva and preventing the invasion of infectious pathogens in the tissue. Excessive dryness of the eyes occurs, for example, in Sunny weather, especially if the eyes are not protected points, or too windy weather. The eyes should be against such adverse conditions, are protected. If there is a feeling of dry eye, it is advisable to apply the so-called artificial tears, which can be bought in pharmacies without a prescription.